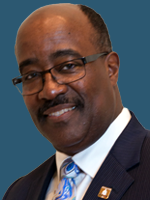 Alvin J. Cowans, CCUE, serving as President/CEO since November 1985 of McCoy Federal Credit Union in Orlando, Florida and has been in the financial industry since 1978. McCoy Federal is a large community credit union with over $549 million in assets as of February 2017. The Credit Union’s field of membership is the Orlando MSA serving Orange, Osceola, Seminole and Lake Counties.

Alvin earned his Bachelor of Science degree in Journalism from the University of Florida, Gainesville, Florida in 1977. He was a four-year letter winner for the Fighting Gator Football Team 1973 to 1976 and was Co-Captain in 1976. Was selected as All-Southeastern Conference Defensive Back, and to the Senior Bowl in 1976. A 10th Round Draft choice of the Pittsburgh Steelers in 1977 and a Free Agent pick for the Washington Redskins in 1978. He was inducted into the University of Florida Gator Athletic Hall of Fame in 2003. His involvement with UF has included serving on the Presidency of the Letterman’s Association, Director of Gator Boosters and as a Director for two terms for the University of Florida Foundation, Inc.

Alvin was named to the Official Registry of the “Outstanding Young Men of America” and the Who’s Who of American Business Leaders. He was selected into the Who’s Who In America’s Credit Unions.

He served the maximum nine years as Region III Director for the National Association of Federal Credit Unions (NAFCU) a trade association in Washington, DC.

Alvin was appointed by the President of the United States William J. Clinton, to a three (3) year term on the Federal Reserves’, Consumer Advisory Council (CAC). He was appointed by Florida Governor Bob Graham to the Valencia Community College Board of Trustee and served two years.

Alvin is serving and has served with various community organizations in a multitude of capacities over his 40 years in the Orlando area.

He is a member of the Alpha Phi Alpha, the Sigma Pi Phi Fraternities and the 100 Blackmen of Orlando.  April 2011 he was inducted as an honorary member of the Florida Blue Key.